The history of Parisian tea rooms is intimately tied to the history of the Ladurée family. It all began in 1862, when Louis Ernest Ladurée, a man from France’s southwest, created a bakery in Paris at 16 rue Royale. The same year, the first stone of the Garnier Opera House was laid, and the area surrounding the Madeleine was rapidly developing into one of the capital’s most important and elegant business districts. The most prestigious names in French luxury items had already taken up residence in this neighbourhood. In 1871, while Baron Haussmann was giving Paris a “new face”, a fire at the bakery opened up the possibility of transforming it into a pastry shop. The decoration of the pastry shop was entrusted to Jules Cheret, a famous turn-of-the-century painter and poster artist. Mr. Cheret sought inspiration from the painting techniques used for the ceiling of the Sistine Chapel and the Garnier Opera House. By integrating them into his work, he added depth and relief to the ceilings decorated with chubby cherubs, notably the “Pastry Angel” who was later to inspire the House’s graphic identity. Under the Second Empire, cafés developed and became more and more luxurious. They attracted Parisian high society. Along with the chic restaurants around the Madeleine, they became the showcases of the capital. The beginning of this century found Paris wrapped up in a frenzy of entertainment and going out on the town. Parisians flocked to the Universal Exposition. Women were also changing. They wanted to make new acquaintances, but literary salons and literature circles were outmoded. Louis Ernest Ladurée’s wife, Jeanne Souchard, had the idea of mixing styles: The Parisian café and pastry shop gave birth to one of the first tea rooms in town. The ”salon de thé” had a definite advantage over the cafés: women could gather in complete freedom. 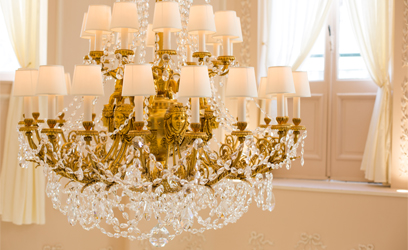 THE STORY OF THE MACARON

The story of the Ladurée macaron starts in the middle of the 19th century with Pierre Desfontaines, who first thought of taking two macaron shells and joining them with a delicious ganache filling. The recipe has not changed since. Ladurée’s refined atmosphere, charged with history, drew David Holder and his father Francis Holder, founder of the Holder Group attention. In 1993, they decided to buy this Parisian institution, and to promote and enlarge the famous “Maison”. In September 1997, Ladurée opened at 75, avenue des Champs-Elysées. Francis Holder and David Holder, President of Ladurée, sough to create a refined, authentic location on the most beautiful avenue in the world in keeping with the image of the tea room on the rue Royale. Ladurée is a veritable song to sweets and pastry innovation. Every moment of creation is an intense experience, that is why, twice a year, like fashion designers, the House imagines news desserts such as the Rose Religieuse, the Rose- Raspberry Saint Honoré, the Liquorice Millefeuille and the Blackcurrant-Violet Macaron.